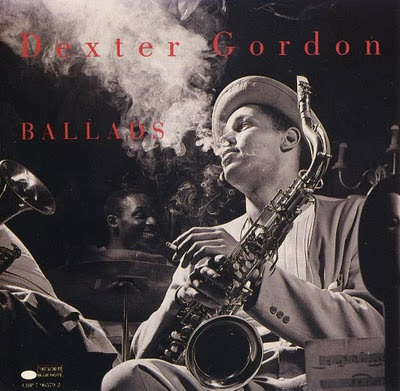 Dexter Gordon - Ballads
1962-1965. A good collection of cuts from various Gordon Blue Note sessions. Though you can't knock the quality of the material, this remains a troublesome practice.


Along with Gene Ammons and Stanley Turrentine, Dexter Gordon was one of the top ballad players of the '60s. Having already made his name in the bebop era and as an expatriate in Europe, Gordon returned to the States to record a series of fine Blue Note discs during the first half of the decade. This edition of the label's Ballads series features Gordon at his peak and in the company of some of hard bop's best players. Whether melding nicely with trumpeter Donald Byrd from a Paris date in 1964 ("Darn That Dream") or locking in with the stellar rhythm section of Sonny Clark, Butch Warren, and Billy Higgins ("Don't Explain"), Gordon delivers his almost sleepy and smoke-filled solos with regal grace. The same can also be said of the rest of this incredible program, including a latter-day live cut from 1978. A perfect set for those in need of a provocative after-hours session in front of the stereo.

Thanks for all these uploads man.