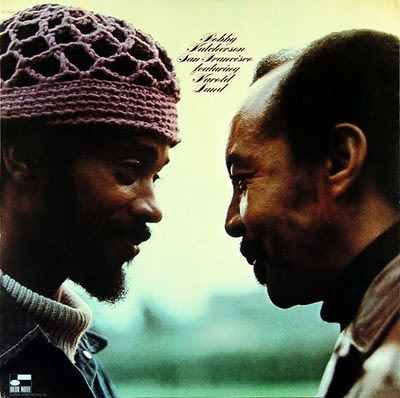 Bobby Hutcherson's late-'60s partnership with tenor saxophonist Harold Land had always produced soulful results, but not until San Francisco did that translate into a literal flirtation with funk and rock. After watching several advanced post-bop sessions gather dust in the vaults, Hutcherson decided to experiment with his sound a bit, but San Francisco still doesn't wind up the commercial jazz-funk extravaganza that purists might fear. Instead, Hutcherson and Land stake out a warm and engaging middle ground between muscular funk and Coltrane-style modality; in other words, they have their cake and eat it too. Joined by pianist/keyboardist Joe Sample (also of the Jazz Crusaders), acoustic/electric bassist John Williams, and drummer Mickey Roker, Hutcherson and Land cook up a series of spacious, breezy grooves that sound unlike any other record in the vibist's discography (even his more commercial fusion sessions). The selections -- all group-member originals -- often skirt the edges of fusion, but rarely play it as expected; they might float some spare tradeoffs over a loping, heavy bass groove, throw in an oboe solo by Land, or -- as on the slowest piece -- keep time only with intermittently spaced piano chords. It's all done with enough imagination and harmonic sophistication to achieve the rare feat of holding appeal for traditional jazz and rare-groove fans alike. It's a shame Hutcherson didn't explore this direction more, because San Francisco is not only one of his best albums, but also one of his most appealing and accessible.