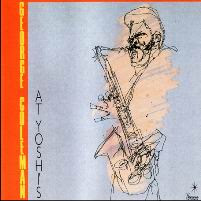 When any recording made by George Coleman is issued, it's an instant event. Though Coleman has always been busy performing, writing, and especially teaching, scant few LPs or CDs have come listeners' way. It is especially thrilling to hear him live in concert performance at the initial site of the then newly minted Yoshi's in Oakland, CA, as his extended techniques and heightened sense of tonal ideas come fully to the fore. Coleman and pianist Harold Mabern, both originally from the fertile jazz scene in Memphis, make the perfect tandem, ably supported by super pros in expatriate drummer Alvin Queen and veteran New York bassist Ray Drummond, both of whom Coleman played with when he was in Europe.There are many solemn, laid-back, and reflective moments from Coleman, as both of the opening tracks, "They Say It's Wonderful" and "Good Morning Heartache," warm slowly and simmer at their easily swinging maximum, with the tenor man progressively squeezing out more and more notes in refined fashion.Never far from the soul of his homeland, "Laig Gobblin' Blues" is a refreshing modal original by the leader, a 5/4 beat in a 12-bar idea, with 7/4 tossed in cleverly. The dignity and class of Coleman cannot be overemphasized, as he further displays on his neat and clean composition "Father." A lovely and loping "Soul Eyes" is a perfect closer over its nearly 17 minutes, giving pause to the thought that it was in fact Coleman who influenced John Coltrane. The quick, constantly forward-moving Freddie Hubbard standard waltz "Up Jumped Spring" further shows a relationship between the tenor titans, with the band quoting Trane's "Ole." The talent of Mabern is formidable, tasteful, and exciting, as showcased during his rumbling chords during "Io," a killer modal track written by Paul Arslanian, as Coleman inserts a memorable singsong line and Queen injects some calypso. This one is as definitive a track as Coleman has in his repertoire. Frankly, the whole CD from top to bottom has Coleman and his band inspired to the hilt and playing their best, and At Yoshi's is a highly recommended effort that deserves a space on each and every jazz lover's shelf.