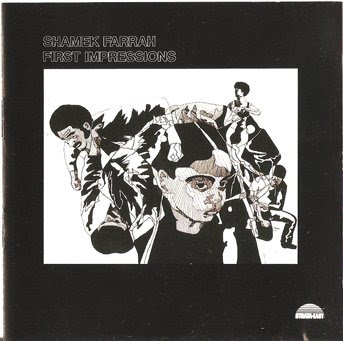 As Strata-East Records got rolling, one of the admirable things it was able to do was offer a platform to some more obscure artists who weren’t being heard elsewise, folks like Billy Parker’s Fourth World (including DeeDee, Ronald, and Cecil Bridgewater); the Washington, DC ensemble Juju (who evolved from an Art Ensemble knock-off into the great jazz-funk band Oneness of Juju by the mid-70s); and alto sax player Shamek Farrah. I don’t really know too much about Shamek except that he made two great albums of spiritual jazz for Strata-East in 1974 and ’77 (the second and half of the first in collaboration with pianist Sonelius Smith).
01 "Meterologicly Tuned" (11:20) - Shamek Farrah
02 "Watch What Happens Now" (5:41) - Fredger Dupree
03 "Umoja Suite" (7:23) - Norman Person
04 "First impressions" (10:28) - Shamek Farrah

hi there, always enjoy your blog. I've had a link to you site since I started up my own blog a while back. Would you consider adding me to your bloglist? you can find me at http://funkyfrolic.blogspot.com/
Cheers, Mr.Craig

Hola, New Years greetings from Espana. I wanted to thank you for your informative blog and the hard work you must put in. I don't leave as many comments as I should, buzzing around blog land and all over the web, but I want to take this opportunity to thank you.

I also wanted to inform you that I put to your blog on my blog watch 'Information Inspiration'. It's really a big personal blog roll, but I'm sure some music fans will find it useful; http://information-inspiration1.blogspot.com

Today I launched a new blog 'Rhythm And Groove' which you may want to check out when you have the time; http://rhythmandgroove.blogspot.com/

hi,
i added your blog to our blogwatch.
and please link us at your blog, too as a support.
thanks a lot.

Thanks! and anything to contribute to Milton Suggs' scanty discography is a blessing.