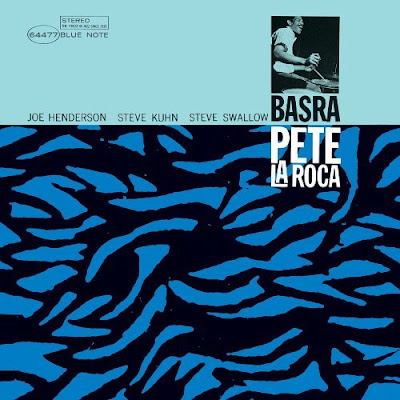 "It is strange to realize that drummer Pete La Roca only led two albums during the prime years of his career, for this [LP] reissue of his initial date is a classic. La Roca's three originals ("Basra," which holds one's interest despite staying on one chord throughout, the blues "Candu," and the complex "Tears Come From Heaven") are stimulating but it is the other three songs that really bring out the best playing in the quartet (which is comprised of tenor saxophonist Joe Henderson, pianist Steve Kuhn, and bassist Steve Swallow in addition to La Roca). "Malaguena" is given a great deal of passion, Swallow's "Eiderdown" (heard in its initial recording) receives definitive treatment, and the ballad "Lazy Afternoon" is both haunting and very memorable; Henderson's tone perfectly fits that piece."
Scott Yanow, All Music

Hello and thanks to lend the album to us of quartetto the greco thing, a question podrias to review the subject I number 05. Dropping Four is that it seems that this damaged since when decompressing it indicates then that to you that this damaged, podrias to resubir it or to only put a connection with that subject, you agradeceria. And since we are by chance not tendras that way albunes of quintetto greco snap count and of right spirit? Greetings and thanks.